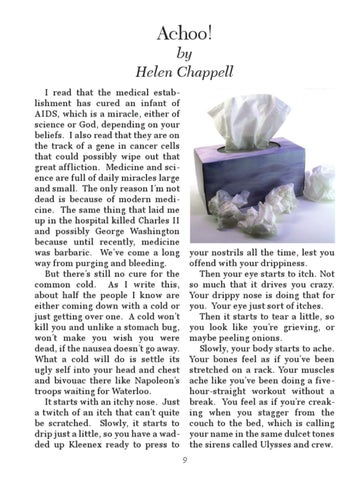 by Helen Chappell I read that the medical establishment has cured an infant of AIDS, which is a miracle, either of science or God, depending on your beliefs. I also read that they are on the track of a gene in cancer cells that could possibly wipe out that great affliction. Medicine and science are full of daily miracles large and small. The only reason I’m not dead is because of modern medicine. The same thing that laid me up in the hospital killed Charles II and possibly George Washington because until recently, medicine was barbaric. We’ve come a long way from purging and bleeding. But there’s still no cure for the common cold. As I write this, about half the people I know are either coming down with a cold or just getting over one. A cold won’t kill you and unlike a stomach bug, won’t make you wish you were dead, if the nausea doesn’t go away. What a cold will do is settle its ugly self into your head and chest and bivouac there like Napoleon’s troops waiting for Waterloo. It starts with an itchy nose. Just a twitch of an itch that can’t quite be scratched. Slowly, it starts to drip just a little, so you have a wadded up Kleenex ready to press to

your nostrils all the time, lest you offend with your drippiness. Then your eye starts to itch. Not so much that it drives you crazy. Your drippy nose is doing that for you. Your eye just sort of itches. Then it starts to tear a little, so you look like you’re grieving, or maybe peeling onions. Slowly, your body starts to ache. Your bones feel as if you’ve been stretched on a rack. Your muscles ache like you’ve been doing a fivehour-straight workout without a break. You feel as if you’re creaking when you stagger from the couch to the bed, which is calling your name in the same dulcet tones the sirens called Ulysses and crew. 9