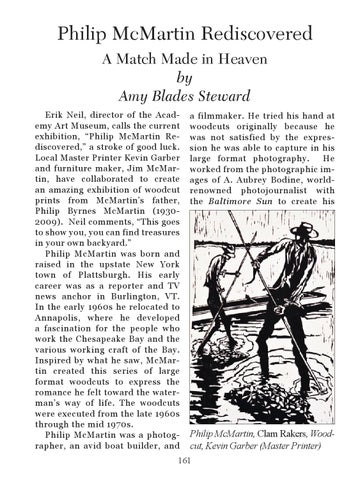 Philip McMartin Rediscovered A Match Made in Heaven by Amy Blades Steward Erik Neil, director of the Academy Art Museum, calls the current exhibition, “Philip McMartin Rediscovered,” a stroke of good luck. Local Master Printer Kevin Garber and furniture maker, Jim McMartin, have collaborated to create an amazing exhibition of woodcut prints from McMartin’s father, Philip Byrnes McMartin (19302009). Neil comments, “This goes to show you, you can find treasures in your own backyard.” Philip McMartin was born and raised in the upstate New York town of Plattsburgh. His early career was as a reporter and TV news anchor in Burlington, VT. In the early 1960s he relocated to Annapolis, where he developed a fascination for the people who work the Chesapeake Bay and the various working craft of the Bay. Inspired by what he saw, McMartin created this series of large format woodcuts to express the romance he felt toward the waterman’s way of life. The woodcuts were executed from the late 1960s through the mid 1970s. Philip McMartin was a photographer, an avid boat builder, and

a filmmaker. He tried his hand at woodcuts originally because he was not satisfied by the expression he was able to capture in his large format photography. He worked from the photographic images of A. Aubrey Bodine, worldrenowned photojournalist with the Baltimore Sun to create his