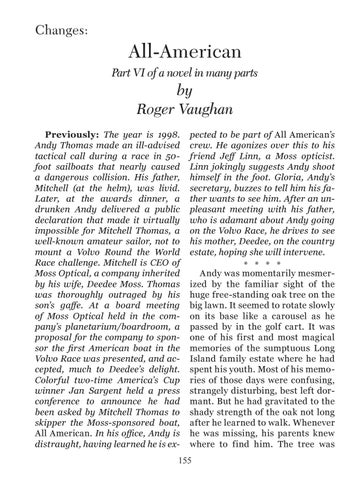 All-American Part VI of a novel in many parts

by Roger Vaughan Previously: The year is 1998. Andy Thomas made an ill-advised tactical call during a race in 50foot sailboats that nearly caused a dangerous collision. His father, Mitchell (at the helm), was livid. Later, at the awards dinner, a drunken Andy delivered a public declaration that made it virtually impossible for Mitchell Thomas, a well-known amateur sailor, not to mount a Volvo Round the World Race challenge. Mitchell is CEO of Moss Optical, a company inherited by his wife, Deedee Moss. Thomas was thoroughly outraged by his son’s gaffe. At a board meeting of Moss Optical held in the company’s planetarium/boardroom, a proposal for the company to sponsor the first American boat in the Volvo Race was presented, and accepted, much to Deedee’s delight. Colorful two-time America’s Cup winner Jan Sargent held a press conference to announce he had been asked by Mitchell Thomas to skipper the Moss-sponsored boat, All American. In his office, Andy is distraught, having learned he is ex-

pected to be part of All American’s crew. He agonizes over this to his friend Jeff Linn, a Moss opticist. Linn jokingly suggests Andy shoot himself in the foot. Gloria, Andy’s secretary, buzzes to tell him his father wants to see him. After an unpleasant meeting with his father, who is adamant about Andy going on the Volvo Race, he drives to see his mother, Deedee, on the country estate, hoping she will intervene. * * * * Andy was momentarily mesmerized by the familiar sight of the huge free-standing oak tree on the big lawn. It seemed to rotate slowly on its base like a carousel as he passed by in the golf cart. It was one of his first and most magical memories of the sumptuous Long Island family estate where he had spent his youth. Most of his memories of those days were confusing, strangely disturbing, best left dormant. But he had gravitated to the shady strength of the oak not long after he learned to walk. Whenever he was missing, his parents knew where to find him. The tree was