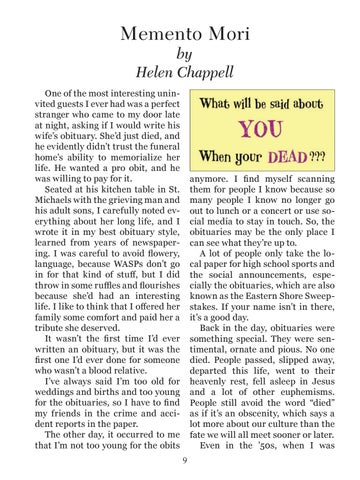 One of the most interesting uninvited guests I ever had was a perfect stranger who came to my door late at night, asking if I would write his wife’s obituary. She’d just died, and he evidently didn’t trust the funeral home’s ability to memorialize her life. He wanted a pro obit, and he was willing to pay for it. Seated at his kitchen table in St. Michaels with the grieving man and his adult sons, I carefully noted everything about her long life, and I wrote it in my best obituary style, learned from years of newspapering. I was careful to avoid flowery, language, because WASPs don’t go in for that kind of stuff, but I did throw in some ruffles and flourishes because she’d had an interesting life. I like to think that I offered her family some comfort and paid her a tribute she deserved. It wasn’t the first time I’d ever written an obituary, but it was the first one I’d ever done for someone who wasn’t a blood relative. I’ve always said I’m too old for weddings and births and too young for the obituaries, so I have to find my friends in the crime and accident reports in the paper. The other day, it occurred to me that I’m not too young for the obits

anymore. I find myself scanning them for people I know because so many people I know no longer go out to lunch or a concert or use social media to stay in touch. So, the obituaries may be the only place I can see what they’re up to. A lot of people only take the local paper for high school sports and the social announcements, especially the obituaries, which are also known as the Eastern Shore Sweepstakes. If your name isn’t in there, it’s a good day. Back in the day, obituaries were something special. They were sentimental, ornate and pious. No one died. People passed, slipped away, departed this life, went to their heavenly rest, fell asleep in Jesus and a lot of other euphemisms. People still avoid the word “died” as if it’s an obscenity, which says a lot more about our culture than the fate we will all meet sooner or later. Even in the ’50s, when I was 9