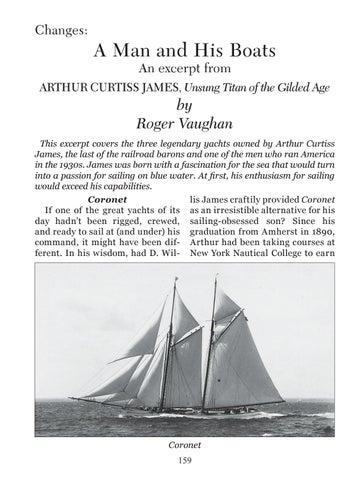 A Man and His Boats An excerpt from

by Roger Vaughan This excerpt covers the three legendary yachts owned by Arthur Curtiss James, the last of the railroad barons and one of the men who ran America in the 1930s. James was born with a fascination for the sea that would turn into a passion for sailing on blue water. At first, his enthusiasm for sailing would exceed his capabilities. Coronet If one of the great yachts of its day hadnâ&amp;#x20AC;&amp;#x2122;t been rigged, crewed, and ready to sail at (and under) his command, it might have been different. In his wisdom, had D. Wil-

lis James craftily provided Coronet as an irresistible alternative for his sailing-obsessed son? Since his graduation from Amherst in 1890, Arthur had been taking courses at New York Nautical College to earn