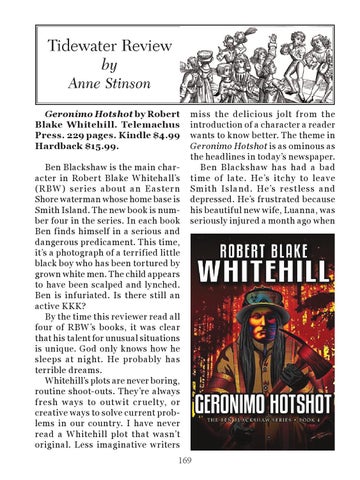 Geronimo Hotshot by Robert Blake Whitehill. Telemachus Press. 229 pages. Kindle $4.99 Hardback $15.99. Ben Blackshaw is the main character in Robert Blake Whitehall’s (R BW) ser ies about an Eastern Shore waterman whose home base is Smith Island. The new book is number four in the series. In each book Ben finds himself in a serious and dangerous predicament. This time, it’s a photograph of a terrified little black boy who has been tortured by grown white men. The child appears to have been scalped and lynched. Ben is infuriated. Is there still an active KKK? By the time this reviewer read all four of RBW’s books, it was clear that his talent for unusual situations is unique. God only knows how he sleeps at night. He probably has terrible dreams. Whitehill’s plots are never boring, routine shoot-outs. They’re always fresh ways to outw it cruelt y, or creative ways to solve current problems in our country. I have never read a Whitehill plot that wasn’t original. Less imaginative writers

miss the delicious jolt from the introduction of a character a reader wants to know better. The theme in Geronimo Hotshot is as ominous as the headlines in today’s newspaper. Ben Blackshaw has had a bad time of late. He’s itchy to leave Smith Island. He’s restless and depressed. He’s frustrated because his beautiful new wife, Luanna, was seriously injured a month ago when