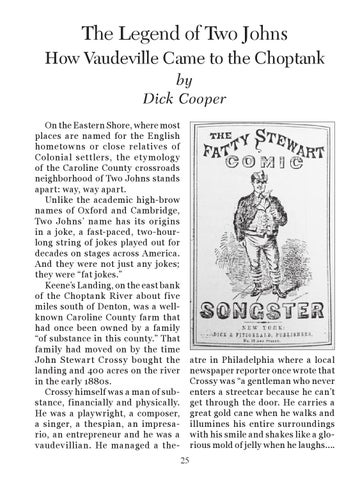 The Legend of Two Johns How Vaudeville Came to the Choptank by Dick Cooper On the Eastern Shore, where most places are named for the English hometow ns or close relatives of Colonial settlers, the etymology of the Caroline County crossroads neighborhood of Two Johns stands apart: way, way apart. Unlike the academic high-brow names of Oxford and Cambridge, Two Johns’ name has its origins in a joke, a fast-paced, two-hourlong string of jokes played out for decades on stages across America. And they were not just any jokes; they were “fat jokes.” Keene’s Landing, on the east bank of the Choptank River about five miles south of Denton, was a wellknown Caroline County farm that had once been owned by a family “of substance in this county.” That family had moved on by the time John Stewart Crossy bought the landing and 400 acres on the river in the early 1880s. Crossy himself was a man of substance, financially and physically. He was a playwright, a composer, a singer, a thespian, an impresario, an entrepreneur and he was a vaudevillian. He managed a the-

atre in Philadelphia where a local newspaper reporter once wrote that Crossy was “a gentleman who never enters a streetcar because he can’t get through the door. He carries a great gold cane when he walks and illumines his entire surroundings with his smile and shakes like a glorious mold of jelly when he laughs…. 25