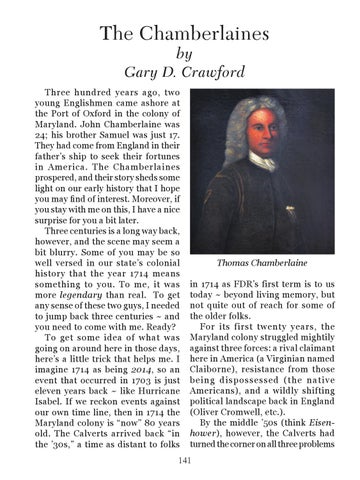 The Chamberlaines by Gary D. Crawford

Three hundred years ago, two young Englishmen came ashore at the Port of Oxford in the colony of Maryland. John Chamberlaine was 24; his brother Samuel was just 17. They had come from England in their father’s ship to seek their fortunes in America. The Chamberlaines prospered, and their story sheds some light on our early history that I hope you may find of interest. Moreover, if you stay with me on this, I have a nice surprise for you a bit later. Three centuries is a long way back, however, and the scene may seem a bit blurry. Some of you may be so well versed in our state’s colonial history that the year 1714 means something to you. To me, it was more legendary than real. To get any sense of these two guys, I needed to jump back three centuries ~ and you need to come with me. Ready? To get some idea of what was going on around here in those days, here’s a little trick that helps me. I imagine 1714 as being 2014, so an event that occurred in 1703 is just eleven years back ~ like Hurricane Isabel. If we reckon events against our own time line, then in 1714 the Maryland colony is “now” 80 years old. The Calverts arrived back “in the ’30s,” a time as distant to folks

Thomas Chamberlaine in 1714 as FDR’s first term is to us today ~ beyond living memory, but not quite out of reach for some of the older folks. For its first twenty years, the Maryland colony struggled mightily against three forces: a rival claimant here in America (a Virginian named Claiborne), resistance from those being dispossessed (the native Americans), and a wildly shifting political landscape back in England (Oliver Cromwell, etc.). By the middle ’50s (think Eisenhower), however, the Calverts had turned the corner on all three problems