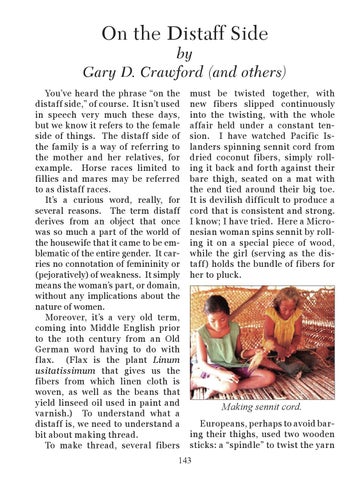 On the Distaff Side

by Gary D. Crawford (and others) You’ve heard the phrase “on the distaff side,” of course. It isn’t used in speech very much these days, but we know it refers to the female side of things. The distaff side of the family is a way of referring to the mother and her relatives, for example. Horse races limited to fillies and mares may be referred to as distaff races. It’s a curious word, really, for several reasons. The term distaff derives from an object that once was so much a part of the world of the housewife that it came to be emblematic of the entire gender. It carries no connotation of femininity or (pejoratively) of weakness. It simply means the woman’s part, or domain, without any implications about the nature of women. Moreover, it’s a very old term, coming into Middle English prior to the 10th century from an Old German word having to do with flax. (Flax is the plant Linum usitatissimum that gives us the fibers from which linen cloth is woven, as well as the beans that yield linseed oil used in paint and varnish.) To understand what a distaff is, we need to understand a bit about making thread. To make thread, several fibers

must be twisted together, with new fibers slipped continuously into the twisting, with the whole affair held under a constant tension. I have watched Pacific Islanders spinning sennit cord from dried coconut fibers, simply rolling it back and forth against their bare thigh, seated on a mat with the end tied around their big toe. It is devilish difficult to produce a cord that is consistent and strong. I know; I have tried. Here a Micronesian woman spins sennit by rolling it on a special piece of wood, while the girl (serving as the distaff) holds the bundle of fibers for her to pluck.