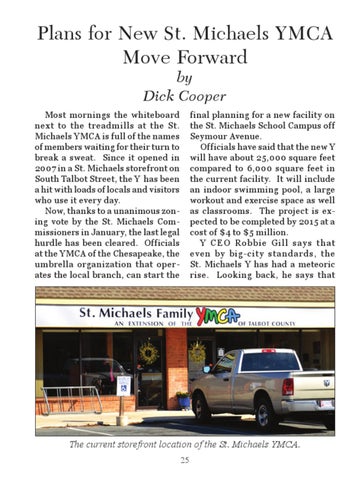 Most mornings the whiteboard next to the treadmills at the St. Michaels YMCA is full of the names of members waiting for their turn to break a sweat. Since it opened in 2007 in a St. Michaels storefront on South Talbot Street, the Y has been a hit with loads of locals and visitors who use it every day. Now, thanks to a unanimous zoning vote by the St. Michaels Commissioners in January, the last legal hurdle has been cleared. Officials at the YMCA of the Chesapeake, the umbrella organization that operates the local branch, can start the

final planning for a new facility on the St. Michaels School Campus off Seymour Avenue. Officials have said that the new Y will have about 25,000 square feet compared to 6,000 square feet in the current facility. It will include an indoor swimming pool, a large workout and exercise space as well as classrooms. The project is expected to be completed by 2015 at a cost of $4 to $5 million. Y CEO Robbie Gi l l say s t hat even by big- cit y standards, t he St. Michaels Y has had a meteoric rise. Looking back, he says that

The current storefront location of the St. Michaels YMCA. 25