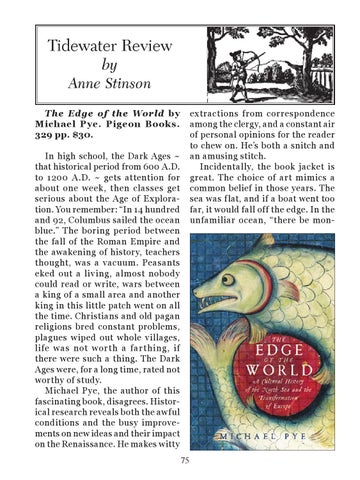 extractions from correspondence among the clergy, and a constant air of personal opinions for the reader to chew on. He’s both a snitch and an amusing stitch. Incidentally, the book jacket is great. The choice of art mimics a common belief in those years. The sea was flat, and if a boat went too far, it would fall off the edge. In the unfamiliar ocean, “there be mon-

In high school, the Dark Ages ~ that historical period from 600 A.D. to 1200 A.D. ~ gets attention for about one week, then classes get serious about the Age of Exploration. You remember: “In 14 hundred and 92, Columbus sailed the ocean blue.” The boring period between the fall of the Roman Empire and the awakening of history, teachers thought, was a vacuum. Peasants eked out a living, almost nobody could read or write, wars between a king of a small area and another king in this little patch went on all the time. Christians and old pagan religions bred constant problems, plagues wiped out whole villages, life was not worth a farthing, if there were such a thing. The Dark Ages were, for a long time, rated not worthy of study. Michael Pye, the author of this fascinating book, disagrees. Historical research reveals both the awful conditions and the busy improvements on new ideas and their impact on the Renaissance. He makes witty 75