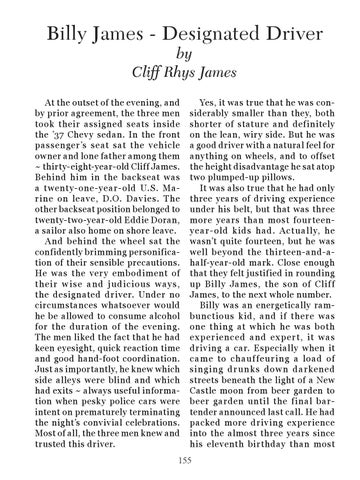 At the outset of the evening, and by prior agreement, the three men took their assigned seats inside the ’37 Chevy sedan. In the front passenger’s seat sat the vehicle owner and lone father among them ~ thirty-eight-year-old Cliff James. Behind him in the backseat was a t went y-one-year-old U.S. Mar ine on leave, D.O. Dav ies. The other backseat position belonged to twenty-two-year-old Eddie Doran, a sailor also home on shore leave. A nd behind the wheel sat the confidently brimming personification of their sensible precautions. He was the ver y embodiment of t hei r w i se a nd jud iciou s w ay s, the designated driver. Under no circumstances whatsoever would he be allowed to consume alcohol for the duration of the evening. The men liked the fact that he had keen eyesight, quick reaction time and good hand-foot coordination. Just as importantly, he knew which side alleys were blind and which had exits ~ always useful information when pesky police cars were intent on prematurely terminating the night’s convivial celebrations. Most of all, the three men knew and trusted this driver.

Yes, it was true that he was considerably smaller than they, both shorter of stature and definitely on the lean, wiry side. But he was a good driver with a natural feel for anything on wheels, and to offset the height disadvantage he sat atop two plumped-up pillows. It was also true that he had only three years of driving experience under his belt, but that was three more years than most fourteenyear- old k ids had. Ac t ua lly, he wasn’t quite fourteen, but he was well beyond the thirteen-and-ahalf-year-old mark. Close enough that they felt justified in rounding up Billy James, the son of Clif f James, to the next whole number. Billy was an energetically rambunctious k id, and if there was one thing at which he was both ex per ienced and ex per t, it was driving a car. Especially when it c a me to chauf feur ing a load of sing ing dr unk s dow n darkened streets beneath the light of a New Castle moon from beer garden to beer garden until the f inal bartender announced last call. He had packed more driving experience into the almost three years since his eleventh birthday than most