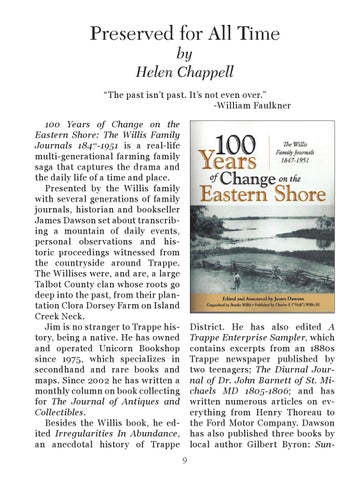 Preserved for All Time by Helen Chappell

“The past isn’t past. It’s not even over.” -William Faulkner 100 Years of Change on the Eastern Shore: The Willis Family Journals 1847-1951 is a real-life multi-generational farming family saga that captures the drama and the daily life of a time and place. Presented by the Willis family with several generations of family journals, historian and bookseller James Dawson set about transcribing a mountain of daily events, personal observations and historic proceedings witnessed from the countryside around Trappe. The Willises were, and are, a large Talbot County clan whose roots go deep into the past, from their plantation Clora Dorsey Farm on Island Creek Neck. Jim is no stranger to Trappe history, being a native. He has owned and operated Unicorn Bookshop since 1975, which specializes in secondhand and rare books and maps. Since 2002 he has written a monthly column on book collecting for The Journal of Antiques and Collectibles. Besides the Willis book, he edited Irregularities In Abundance, an anecdotal history of Trappe

District. He has also edited A Trappe Enterprise Sampler, which contains excerpts from an 1880s Trappe newspaper published by two teenagers; The Diurnal Journal of Dr. John Barnett of St. Michaels MD 1805-1806; and has written numerous articles on everything from Henry Thoreau to the Ford Motor Company. Dawson has also published three books by local author Gilbert Byron: Sun9