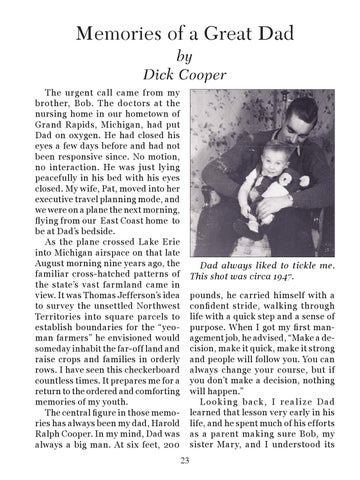 Memories of a Great Dad by Dick Cooper The urgent call came from my brother, Bob. The doctors at the nursing home in our hometown of Grand Rapids, Michigan, had put Dad on oxygen. He had closed his eyes a few days before and had not been responsive since. No motion, no interaction. He was just lying peacefully in his bed with his eyes closed. My wife, Pat, moved into her executive travel planning mode, and we were on a plane the next morning, flying from our East Coast home to be at Dad’s bedside. As the plane crossed Lake Erie into Michigan airspace on that late August morning nine years ago, the familiar cross-hatched patterns of the state’s vast farmland came in view. It was Thomas Jefferson’s idea to survey the unsettled Northwest Territories into square parcels to establish boundaries for the “yeoman farmers” he envisioned would someday inhabit the far-off land and raise crops and families in orderly rows. I have seen this checkerboard countless times. It prepares me for a return to the ordered and comforting memories of my youth. The central figure in those memories has always been my dad, Harold Ralph Cooper. In my mind, Dad was always a big man. At six feet, 200

Dad always liked to tickle me. This shot was circa 1947. pounds, he carried himself with a confident stride, walking through life with a quick step and a sense of purpose. When I got my first management job, he advised, “Make a decision, make it quick, make it strong and people will follow you. You can always change your course, but if you don’t make a decision, nothing will happen.” L o ok i ng bac k , I r e a l i z e Dad learned that lesson very early in his life, and he spent much of his efforts as a parent making sure Bob, my sister Mary, and I understood its 23