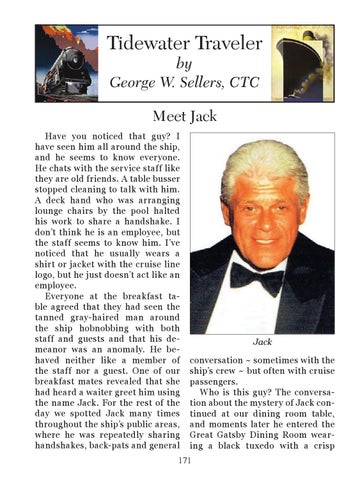 Tidewater Traveler by George W. Sellers, CTC Meet Jack Have you noticed that guy? I have seen him all around the ship, and he seems to know everyone. He chats with the service staff like they are old friends. A table busser stopped cleaning to talk with him. A deck hand who was arranging lounge chairs by the pool halted his work to share a handshake. I don’t think he is an employee, but the staff seems to know him. I’ve noticed that he usually wears a shirt or jacket with the cruise line logo, but he just doesn’t act like an employee. Everyone at the breakfast table agreed that they had seen the tanned gray-haired man around the ship hobnobbing with both staff and guests and that his demeanor was an anomaly. He behaved neither like a member of the staff nor a guest. One of our breakfast mates revealed that she had heard a waiter greet him using the name Jack. For the rest of the day we spotted Jack many times throughout the ship’s public areas, where he was repeatedly sharing handshakes, back-pats and general

Jack conversation ~ sometimes with the ship’s crew ~ but often with cruise passengers. Who is this guy? The conversation about the mystery of Jack continued at our dining room table, and moments later he entered the Great Gatsby Dining Room wearing a black tuxedo with a crisp