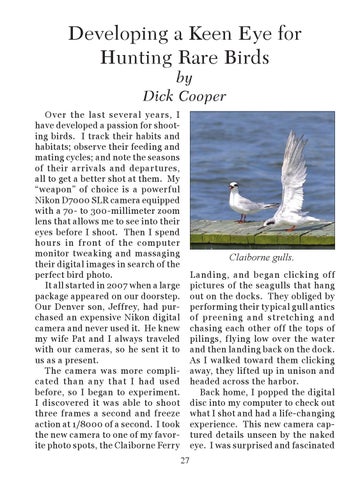 Over the last several years, I have developed a passion for shooting birds. I track their habits and habitats; observe their feeding and mating cycles; and note the seasons of their arrivals and departures, all to get a better shot at them. My â&#x20AC;&#x153;weaponâ&#x20AC;? of choice is a powerful Nikon D7000 SLR camera equipped with a 70- to 300-millimeter zoom lens that allows me to see into their eyes before I shoot. Then I spend hours in f ront of t he computer monitor tweaking and massaging their digital images in search of the perfect bird photo. It all started in 2007 when a large package appeared on our doorstep. Our Denver son, Jeffrey, had purchased an expensive Nikon digital camera and never used it. He knew my wife Pat and I always traveled with our cameras, so he sent it to us as a present. The camera was more complicated t han any that I had used before, so I began to experiment. I discovered it was able to shoot three frames a second and freeze action at 1/8000 of a second. I took the new camera to one of my favorite photo spots, the Claiborne Ferry

Claiborne gulls. Landing, and began clicking off pictures of the seagulls that hang out on the docks. They obliged by performing their typical gull antics of preening and stretching and chasing each other off the tops of pilings, f lying low over the water and then landing back on the dock. As I walked toward them clicking away, they lifted up in unison and headed across the harbor. Back home, I popped the digital disc into my computer to check out what I shot and had a life-changing experience. This new camera captured details unseen by the naked eye. I was surprised and fascinated 27