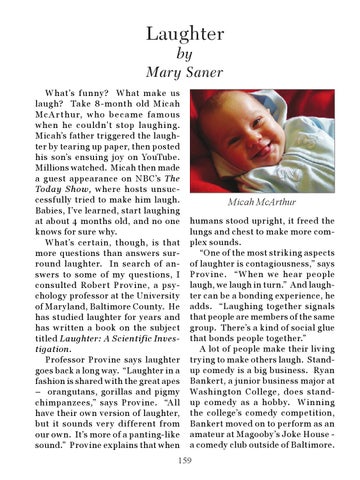 What’s funny? What make us laugh? Take 8-month old Micah Mc A r thur, who became famous when he couldn’t stop laughing. Micah’s father triggered the laughter by tearing up paper, then posted his son’s ensuing joy on YouTube. Millions watched. Micah then made a guest appearance on NBC’s The Today Show, where hosts unsuccessfully tried to make him laugh. Babies, I’ve learned, start laughing at about 4 months old, and no one knows for sure why. What’s certain, though, is that more questions than answers surround laughter. In search of answers to some of my questions, I consulted Robert Provine, a psychology professor at the University of Maryland, Baltimore County. He has studied laughter for years and has written a book on the subject titled Laughter: A Scientific Investigation. Professor Provine says laughter goes back a long way. “Laughter in a fashion is shared with the great apes – orangutans, gorillas and pigmy chimpanzees,” says Provine. “All have their own version of laughter, but it sounds very different from our own. It’s more of a panting-like sound.” Provine explains that when

Micah McArthur humans stood upright, it freed the lungs and chest to make more complex sounds. “One of the most striking aspects of laughter is contagiousness,” says Provine. “When we hear people laugh, we laugh in turn.” And laughter can be a bonding experience, he adds. “Laughing together signals that people are members of the same group. There’s a kind of social glue that bonds people together.” A lot of people make their living trying to make others laugh. Standup comedy is a big business. Ryan Bankert, a junior business major at Washington College, does standup comedy as a hobby. Winning the college’s comedy competition, Bankert moved on to perform as an amateur at Magooby’s Joke House a comedy club outside of Baltimore.