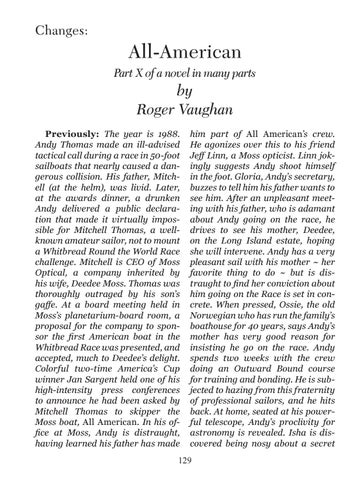 All-American Part X of a novel in many parts

by Roger Vaughan Previously: The year is 1988. Andy Thomas made an ill-advised tactical call during a race in 50-foot sailboats that nearly caused a dangerous collision. His father, Mitchell (at the helm), was livid. Later, at the awards dinner, a drunken Andy delivered a public declaration that made it virtually impossible for Mitchell Thomas, a wellknown amateur sailor, not to mount a Whitbread Round the World Race challenge. Mitchell is CEO of Moss Optical, a company inherited by his wife, Deedee Moss. Thomas was thoroughly outraged by his son’s gaffe. At a board meeting held in Moss’s planetarium-board room, a proposal for the company to sponsor the first American boat in the Whitbread Race was presented, and accepted, much to Deedee’s delight. Colorful two-time America’s Cup winner Jan Sargent held one of his high-intensity press conferences to announce he had been asked by Mitchell Thomas to skipper the Moss boat, All American. In his office at Moss, Andy is distraught, having learned his father has made

him part of All American’s crew. He agonizes over this to his friend Jeff Linn, a Moss opticist. Linn jokingly suggests Andy shoot himself in the foot. Gloria, Andy’s secretary, buzzes to tell him his father wants to see him. After an unpleasant meeting with his father, who is adamant about Andy going on the race, he drives to see his mother, Deedee, on the Long Island estate, hoping she will intervene. Andy has a very pleasant sail with his mother ~ her favorite thing to do ~ but is distraught to find her conviction about him going on the Race is set in concrete. When pressed, Ossie, the old Norwegian who has run the family’s boathouse for 40 years, says Andy’s mother has very good reason for insisting he go on the race. Andy spends two weeks with the crew doing an Outward Bound course for training and bonding. He is subjected to hazing from this fraternity of professional sailors, and he hits back. At home, seated at his powerful telescope, Andy’s proclivity for astronomy is revealed. Isha is discovered being nosy about a secret