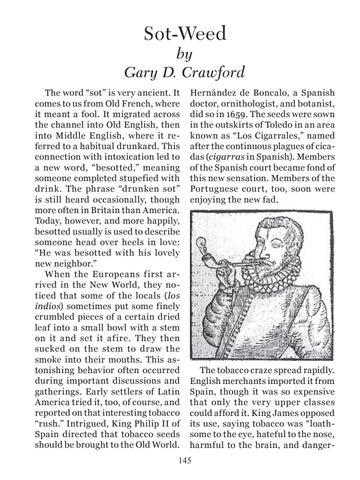 by Gary D. Crawford The word “sot” is very ancient. It comes to us from Old French, where it meant a fool. It migrated across the channel into Old English, then into Middle English, where it referred to a habitual drunkard. This connection with intoxication led to a new word, “besotted,” meaning someone completed stupefied with drink. The phrase “drunken sot” is still heard occasionally, though more often in Britain than America. Today, however, and more happily, besotted usually is used to describe someone head over heels in love: “He was besotted with his lovely new neighbor.” When the Europeans first arrived in the New World, they noticed that some of the locals (los indios) sometimes put some finely crumbled pieces of a certain dried leaf into a small bowl with a stem on it and set it afire. They then sucked on the stem to draw the smoke into their mouths. This astonishing behavior often occurred during important discussions and gatherings. Early settlers of Latin America tried it, too, of course, and reported on that interesting tobacco “rush.” Intrigued, King Philip II of Spain directed that tobacco seeds should be brought to the Old World.

Hernández de Boncalo, a Spanish doctor, ornithologist, and botanist, did so in 1659. The seeds were sown in the outskirts of Toledo in an area known as “Los Cigarrales,” named after the continuous plagues of cicadas (cigarras in Spanish). Members of the Spanish court became fond of this new sensation. Members of the Portuguese court, too, soon were enjoying the new fad.

The tobacco craze spread rapidly. English merchants imported it from Spain, though it was so expensive that only the ver y upper classes could afford it. King James opposed its use, saying tobacco was “loathsome to the eye, hateful to the nose, harmful to the brain, and danger-