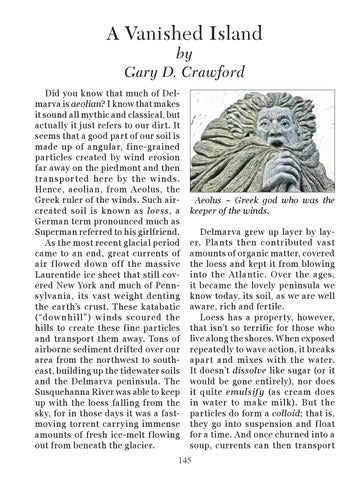 Did you know that much of Delmarva is aeolian? I know that makes it sound all mythic and classical, but actually it just refers to our dirt. It seems that a good part of our soil is made up of angular, fine-grained particles created by wind erosion far away on the piedmont and then transpor ted here by the w inds. Hence, aeolian, from Aeolus, the Greek ruler of the winds. Such aircreated soil is known as loess, a German term pronounced much as Superman referred to his girlfriend. As the most recent glacial period came to an end, great currents of air f lowed down off the massive Laurentide ice sheet that still covered New York and much of Pennsylvania, its vast weight denting the earth’s crust. These katabatic (“dow nhill”) w inds scoured the hills to create these fine particles and transport them away. Tons of airborne sediment drifted over our area from the northwest to southeast, building up the tidewater soils and the Delmarva peninsula. The Susquehanna River was able to keep up with the loess falling from the sky, for in those days it was a fastmoving torrent carrying immense amounts of fresh ice-melt f lowing out from beneath the glacier.

Aeolus ~ Greek god who was the keeper of the winds. Delmarva grew up layer by layer. Plants then contributed vast amounts of organic matter, covered the loess and kept it from blowing into the Atlantic. Over the ages, it became the lovely peninsula we know today, its soil, as we are well aware, rich and fertile. Loess has a property, however, that isn’t so terrific for those who live along the shores. When exposed repeatedly to wave action, it breaks apart and mixes with the water. It doesn’t dissolve like sugar (or it would be gone entirely), nor does it quite emulsify (as cream does in water to make milk). But the particles do form a colloid; that is, they go into suspension and f loat for a time. And once churned into a soup, currents can then transport