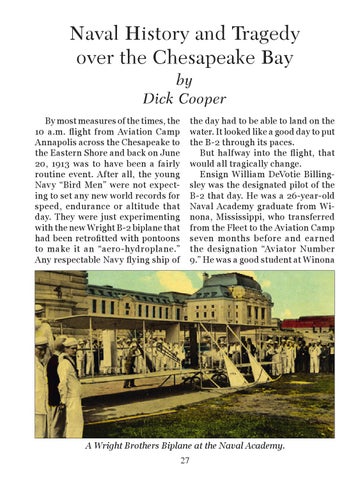 Naval History and Tragedy over the Chesapeake Bay by Dick Cooper By most measures of the times, the 10 a.m. flight from Aviation Camp Annapolis across the Chesapeake to the Eastern Shore and back on June 20, 1913 was to have been a fairly routine event. After all, the young Navy “Bird Men” were not expecting to set any new world records for speed, endurance or altitude that day. They were just experimenting with the new Wright B-2 biplane that had been retrofitted with pontoons to make it an “aero-hydroplane.” Any respectable Navy flying ship of

the day had to be able to land on the water. It looked like a good day to put the B-2 through its paces. But halfway into the flight, that would all tragically change. Ensign William DeVotie Billingsley was the designated pilot of the B-2 that day. He was a 26-year-old Naval Academy graduate from Winona, Mississippi, who transferred from the Fleet to the Aviation Camp seven months before and earned the designation “Aviator Number 9.” He was a good student at Winona

A Wright Brothers Biplane at the Naval Academy. 27