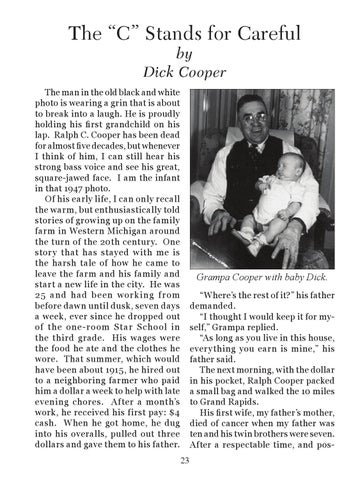 The “C” Stands for Careful by Dick Cooper

The man in the old black and white photo is wearing a grin that is about to break into a laugh. He is proudly holding his first grandchild on his lap. Ralph C. Cooper has been dead for almost five decades, but whenever I think of him, I can still hear his strong bass voice and see his great, square-jawed face. I am the infant in that 1947 photo. Of his early life, I can only recall the warm, but enthusiastically told stories of growing up on the family farm in Western Michigan around the turn of the 20th century. One story that has stayed with me is the harsh tale of how he came to leave the farm and his family and start a new life in the city. He was 25 a nd had been work ing f rom before dawn until dusk, seven days a week, ever since he dropped out of the one-room Star School in the third grade. His wages were the food he ate and the clothes he wore. That summer, which would have been about 1915, he hired out to a neighboring farmer who paid him a dollar a week to help with late evening chores. After a month’s work, he received his first pay: $4 cash. When he got home, he dug into his overalls, pulled out three dollars and gave them to his father.

Grampa Cooper with baby Dick. “Where’s the rest of it?” his father demanded. “I thought I would keep it for myself,” Grampa replied. “As long as you live in this house, everything you earn is mine,” his father said. The next morning, with the dollar in his pocket, Ralph Cooper packed a small bag and walked the 10 miles to Grand Rapids. His first wife, my father’s mother, died of cancer when my father was ten and his twin brothers were seven. After a respectable time, and pos23