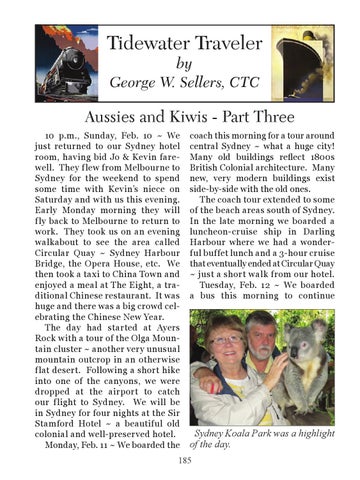 Aussies and Kiwis - Part Three 10 p.m., Sunday, Feb. 10 ~ We just returned to our Sydney hotel room, having bid Jo & Kevin farewell. They f lew from Melbourne to Sydney for the weekend to spend some time with Kevinâ&#x20AC;&#x2122;s niece on Saturday and with us this evening. Early Monday morning they will fly back to Melbourne to return to work. They took us on an evening walkabout to see the area called Circular Quay ~ Sydney Harbour Bridge, the Opera House, etc. We then took a taxi to China Town and enjoyed a meal at The Eight, a traditional Chinese restaurant. It was huge and there was a big crowd celebrating the Chinese New Year. The day had started at Ayers Rock with a tour of the Olga Mountain cluster ~ another very unusual mountain outcrop in an otherwise flat desert. Following a short hike into one of the canyons, we were dropped at the airport to catch our flight to Sydney. We will be in Sydney for four nights at the Sir Stamford Hotel ~ a beautiful old colonial and well-preserved hotel. Monday, Feb. 11 ~ We boarded the

coach this morning for a tour around central Sydney ~ what a huge city! Many old buildings reflect 1800s British Colonial architecture. Many new, very modern buildings exist side-by-side with the old ones. The coach tour extended to some of the beach areas south of Sydney. In the late morning we boarded a luncheon-cruise ship in Darling Harbour where we had a wonderful buffet lunch and a 3-hour cruise that eventually ended at Circular Quay ~ just a short walk from our hotel. Tuesday, Feb. 12 ~ We boarded a bus this morning to continue

Sydney Koala Park was a highlight of the day.