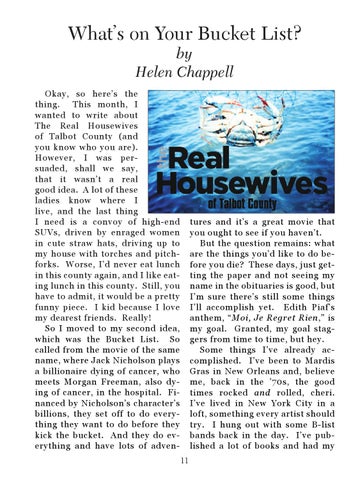 Okay, so here’s the thing. This month, I wanted to write about The Real Housewives of Talbot County (and you know who you are). However, I was persuaded, shall we say, that it wasn’t a real good idea. A lot of these ladies know where I live, and the last thing I need is a convoy of high-end SUVs, driven by enraged women in cute straw hats, driving up to my house with torches and pitchforks. Worse, I’d never eat lunch in this county again, and I like eating lunch in this county. Still, you have to admit, it would be a pretty funny piece. I kid because I love my dearest friends. Really! So I moved to my second idea, which was the Bucket List. So called from the movie of the same name, where Jack Nicholson plays a billionaire dying of cancer, who meets Morgan Freeman, also dying of cancer, in the hospital. Financed by Nicholson’s character’s billions, they set off to do everything they want to do before they kick the bucket. And they do everything and have lots of adven-

tures and it’s a great movie that you ought to see if you haven’t. But the question remains: what are the things you’d like to do before you die? These days, just getting the paper and not seeing my name in the obituaries is good, but I’m sure there’s still some things I’ll accomplish yet. Edith Piaf’s anthem, “Moi, Je Regret Rien,” is my goal. Granted, my goal staggers from time to time, but hey. Some things I’ve already accomplished. I’ve been to Mardis Gras in New Orleans and, believe me, back in the ’70s, the good times rocked and rolled, cheri. I’ve lived in New York City in a loft, something every artist should try. I hung out with some B-list bands back in the day. I’ve published a lot of books and had my 11