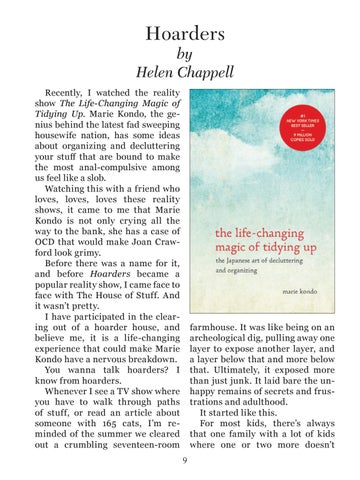 by Helen Chappell Recently, I watched the reality show The Life-Changing Magic of Tidying Up. Marie Kondo, the genius behind the latest fad sweeping housewife nation, has some ideas about organizing and decluttering your stuff that are bound to make the most anal-compulsive among us feel like a slob. Watching this with a friend who loves, loves, loves these reality shows, it came to me that Marie Kondo is not only crying all the way to the bank, she has a case of OCD that would make Joan Crawford look grimy. Before there was a name for it, and before Hoarders became a popular reality show, I came face to face with The House of Stuff. And it wasn’t pretty. I have participated in the clearing out of a hoarder house, and believe me, it is a life-changing experience that could make Marie Kondo have a nervous breakdown. You wanna talk hoarders? I know from hoarders. Whenever I see a TV show where you have to walk through paths of stuff, or read an article about someone with 165 cats, I’m reminded of the summer we cleared out a crumbling seventeen-room

farmhouse. It was like being on an archeological dig, pulling away one layer to expose another layer, and a layer below that and more below that. Ultimately, it exposed more than just junk. It laid bare the unhappy remains of secrets and frustrations and adulthood. It started like this. For most kids, there’s always that one family with a lot of kids where one or two more doesn’t 9