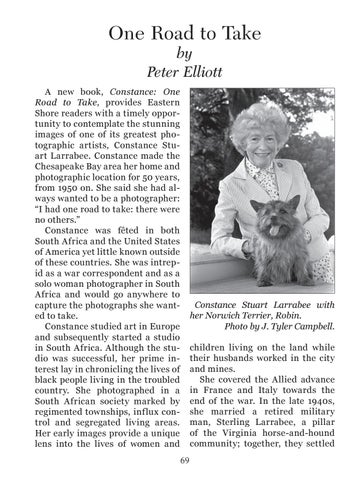 One Road to Take by Peter Elliott

A new book, Constance: One Road to Take, provides Eastern Shore readers with a timely opportunity to contemplate the stunning images of one of its greatest photographic artists, Constance Stuart Larrabee. Constance made the Chesapeake Bay area her home and photographic location for 50 years, from 1950 on. She said she had always wanted to be a photographer: “I had one road to take: there were no others.” Constance was fêted in both South Africa and the United States of America yet little known outside of these countries. She was intrepid as a war correspondent and as a solo woman photographer in South Africa and would go anywhere to capture the photographs she wanted to take. Constance studied art in Europe and subsequently started a studio in South Africa. Although the studio was successful, her prime interest lay in chronicling the lives of black people living in the troubled country. She photographed in a South African society marked by regimented townships, inf lux control and segregated living areas. Her early images provide a unique lens into the lives of women and

Constance Stuart Larrabee with her Norwich Terrier, Robin. Photo by J. Tyler Campbell. children living on the land while their husbands worked in the city and mines. She covered the Allied advance in France and Italy towards the end of the war. In the late 1940s, she married a retired military man, Sterling Larrabee, a pillar of the Virginia horse-and-hound community; together, they settled 69