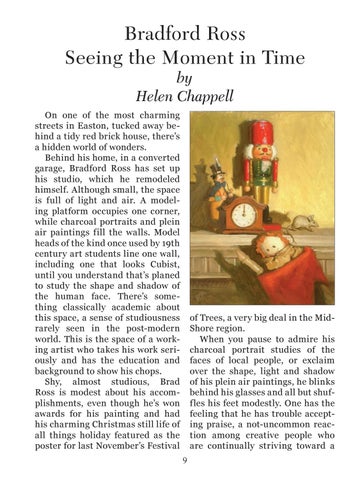 Bradford Ross Seeing the Moment in Time by Helen Chappell

On one of the most charming streets in Easton, tucked away behind a tidy red brick house, there’s a hidden world of wonders. Behind his home, in a converted garage, Bradford Ross has set up his studio, which he remodeled himself. Although small, the space is full of light and air. A modeling platform occupies one corner, while charcoal portraits and plein air paintings fill the walls. Model heads of the kind once used by 19th century art students line one wall, including one that looks Cubist, until you understand that’s planed to study the shape and shadow of the human face. There’s something classically academic about this space, a sense of studiousness rarely seen in the post-modern world. This is the space of a working artist who takes his work seriously and has the education and background to show his chops. Shy, almost studious, Brad Ross is modest about his accomplishments, even though he’s won awards for his painting and had his charming Christmas still life of all things holiday featured as the poster for last November’s Festival

of Trees, a very big deal in the MidShore region. When you pause to admire his charcoal portrait studies of the faces of local people, or exclaim over the shape, light and shadow of his plein air paintings, he blinks behind his glasses and all but shuff les his feet modestly. One has the feeling that he has trouble accepting praise, a not-uncommon reaction among creative people who are continually striving toward a 9