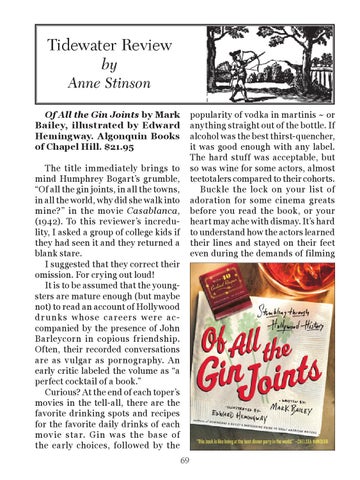 Of All the Gin Joints by Mark Bailey, illustrated by Edward Hemingway. Algonquin Books of Chapel Hill. $21.95

popularity of vodka in martinis ~ or anything straight out of the bottle. If alcohol was the best thirst-quencher, it was good enough with any label. The hard stuff was acceptable, but so was wine for some actors, almost teetotalers compared to their cohorts. Buckle the lock on your list of adoration for some cinema greats before you read the book, or your heart may ache with dismay. It’s hard to understand how the actors learned their lines and stayed on their feet even during the demands of filming

The title immediately brings to mind Humphrey Bogart’s grumble, “Of all the gin joints, in all the towns, in all the world, why did she walk into mine?” in the movie Casablanca, (1942). To this reviewer’s incredulity, I asked a group of college kids if they had seen it and they returned a blank stare. I suggested that they correct their omission. For crying out loud! It is to be assumed that the youngsters are mature enough (but maybe not) to read an account of Hollywood dr unk s whose careers were accompanied by the presence of John Barleycorn in copious friendship. Often, their recorded conversations are as vulgar as pornography. An early critic labeled the volume as “a perfect cocktail of a book.” Curious? At the end of each toper’s movies in the tell-all, there are the favorite drinking spots and recipes for the favorite daily drinks of each mov ie star. Gin was the base of the early choices, followed by the 69