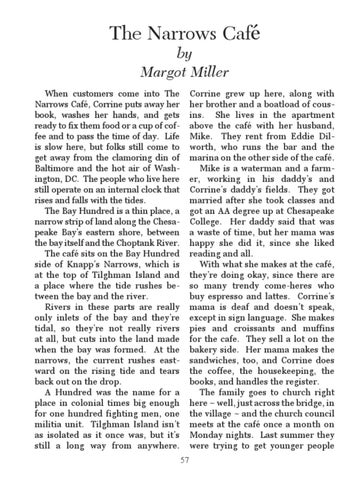 The Narrows Café by Margot Miller

When customers come into The Narrows Café, Corrine puts away her book, washes her hands, and gets ready to fix them food or a cup of coffee and to pass the time of day. Life is slow here, but folks still come to get away from the clamoring din of Baltimore and the hot air of Washington, DC. The people who live here still operate on an internal clock that rises and falls with the tides. The Bay Hundred is a thin place, a narrow strip of land along the Chesapeake Bay’s eastern shore, between the bay itself and the Choptank River. The café sits on the Bay Hundred side of Knapp’s Narrows, which is at the top of Tilghman Island and a place where the tide rushes between the bay and the river. Rivers in these parts are really only inlets of the bay and they’re tidal, so they’re not really rivers at all, but cuts into the land made when the bay was formed. At the narrows, the current rushes eastward on the rising tide and tears back out on the drop. A Hundred was the name for a place in colonial times big enough for one hundred fighting men, one militia unit. Tilghman Island isn’t as isolated as it once was, but it’s still a long way from anywhere.

Corrine grew up here, along with her brother and a boatload of cousins. She lives in the apartment above the café with her husband, Mike. They rent from Eddie Dilworth, who runs the bar and the marina on the other side of the café. Mike is a waterman and a farmer, working in his daddy’s and Corrine’s daddy’s fields. They got married after she took classes and got an AA degree up at Chesapeake College. Her daddy said that was a waste of time, but her mama was happy she did it, since she liked reading and all. With what she makes at the café, they’re doing okay, since there are so many trendy come-heres who buy espresso and lattes. Corrine’s mama is deaf and doesn’t speak, except in sign language. She makes pies and croissants and muffins for the cafe. They sell a lot on the bakery side. Her mama makes the sandwiches, too, and Corrine does the coffee, the housekeeping, the books, and handles the register. The family goes to church right here ~ well, just across the bridge, in the village ~ and the church council meets at the café once a month on Monday nights. Last summer they were trying to get younger people 57