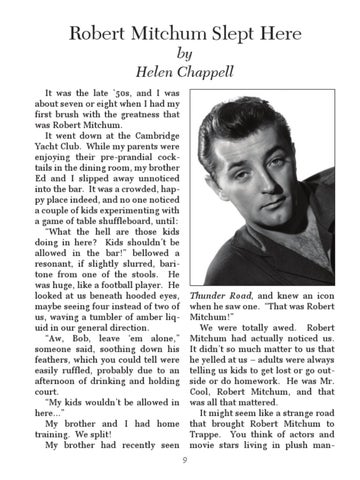 It was the late ’50s, and I was about seven or eight when I had my first brush with the greatness that was Robert Mitchum. It went down at the Cambridge Yacht Club. While my parents were enjoying their pre-prandial cocktails in the dining room, my brother Ed and I slipped away unnoticed into the bar. It was a crowded, happy place indeed, and no one noticed a couple of kids experimenting with a game of table shuffleboard, until: “What the hell are those kids doing in here? Kids shouldn’t be allowed in the bar!” bellowed a resonant, if slightly slurred, baritone from one of the stools. He was huge, like a football player. He looked at us beneath hooded eyes, maybe seeing four instead of two of us, waving a tumbler of amber liquid in our general direction. “Aw, Bob, leave ‘em alone,” someone said, soothing down his feathers, which you could tell were easily ruffled, probably due to an afternoon of drinking and holding court. “My kids wouldn’t be allowed in here...” My brother and I had home training. We split! My brother had recently seen

Thunder Road, and knew an icon when he saw one. “That was Robert Mitchum!” We were totally awed. Robert Mitchum had actually noticed us. It didn’t so much matter to us that he yelled at us – adults were always telling us kids to get lost or go outside or do homework. He was Mr. Cool, Robert Mitchum, and that was all that mattered. It might seem like a strange road that brought Robert Mitchum to Trappe. You think of actors and movie stars living in plush man9