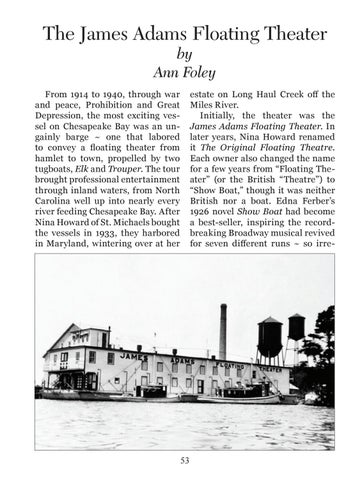 From 1914 to 1940, through war and peace, Prohibition and Great Depression, the most exciting vessel on Chesapeake Bay was an ungainly barge ~ one that labored to convey a floating theater from hamlet to town, propelled by two tugboats, Elk and Trouper. The tour brought professional entertainment through inland waters, from North Carolina well up into nearly every river feeding Chesapeake Bay. After Nina Howard of St. Michaels bought the vessels in 1933, they harbored in Maryland, wintering over at her

estate on Long Haul Creek off the Miles River. Initially, the theater was the James Adams Floating Theater. In later years, Nina Howard renamed it The Original Floating Theatre. Each owner also changed the name for a few years from “Floating Theater” (or the British “Theatre”) to “Show Boat,” though it was neither British nor a boat. Edna Ferber’s 1926 novel Show Boat had become a best-seller, inspiring the recordbreaking Broadway musical revived for seven different runs ~ so irre-