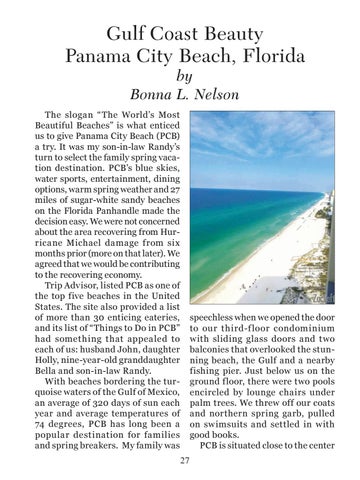 The slogan “The World’s Most Beautiful Beaches” is what enticed us to give Panama City Beach (PCB) a try. It was my son-in-law Randy’s turn to select the family spring vacation destination. PCB’s blue skies, water sports, entertainment, dining options, warm spring weather and 27 miles of sugar-white sandy beaches on the Florida Panhandle made the decision easy. We were not concerned about the area recovering from Hurricane Michael damage from six months prior (more on that later). We agreed that we would be contributing to the recovering economy. Trip Advisor, listed PCB as one of the top five beaches in the United States. The site also provided a list of more than 30 enticing eateries, and its list of “Things to Do in PCB” had something that appealed to each of us: husband John, daughter Holly, nine-year-old granddaughter Bella and son-in-law Randy. With beaches bordering the turquoise waters of the Gulf of Mexico, an average of 320 days of sun each year and average temperatures of 74 degrees, PCB has long been a popular destination for families and spring breakers. My family was

speechless when we opened the door to our third-f loor condominium with sliding glass doors and two balconies that overlooked the stunning beach, the Gulf and a nearby fishing pier. Just below us on the ground f loor, there were two pools encircled by lounge chairs under palm trees. We threw off our coats and northern spring garb, pulled on swimsuits and settled in with good books. PCB is situated close to the center 27