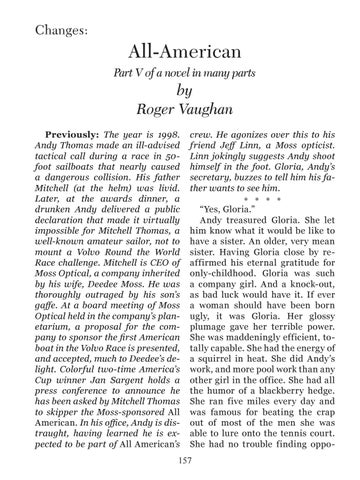 All-American Part V of a novel in many parts

by Roger Vaughan Previously: The year is 1998. Andy Thomas made an ill-advised tactical call during a race in 50foot sailboats that nearly caused a dangerous collision. His father Mitchell (at the helm) was livid. Later, at the awards dinner, a drunken Andy delivered a public declaration that made it virtually impossible for Mitchell Thomas, a well-known amateur sailor, not to mount a Volvo Round the World Race challenge. Mitchell is CEO of Moss Optical, a company inherited by his wife, Deedee Moss. He was thoroughly outraged by his son’s gaffe. At a board meeting of Moss Optical held in the company’s planetarium, a proposal for the company to sponsor the first American boat in the Volvo Race is presented, and accepted, much to Deedee’s delight. Colorful two-time America’s Cup winner Jan Sargent holds a press conference to announce he has been asked by Mitchell Thomas to skipper the Moss-sponsored All American. In his office, Andy is distraught, having learned he is expected to be part of All American’s

crew. He agonizes over this to his friend Jeff Linn, a Moss opticist. Linn jokingly suggests Andy shoot himself in the foot. Gloria, Andy’s secretary, buzzes to tell him his father wants to see him. * * * * “Yes, Gloria.” Andy treasured Gloria. She let him know what it would be like to have a sister. An older, very mean sister. Having Gloria close by reaffirmed his eternal gratitude for only-childhood. Gloria was such a company girl. And a knock-out, as bad luck would have it. If ever a woman should have been born ugly, it was Gloria. Her glossy plumage gave her terrible power. She was maddeningly efficient, totally capable. She had the energy of a squirrel in heat. She did Andy’s work, and more pool work than any other girl in the office. She had all the humor of a blackberry hedge. She ran five miles every day and was famous for beating the crap out of most of the men she was able to lure onto the tennis court. She had no trouble finding oppo-