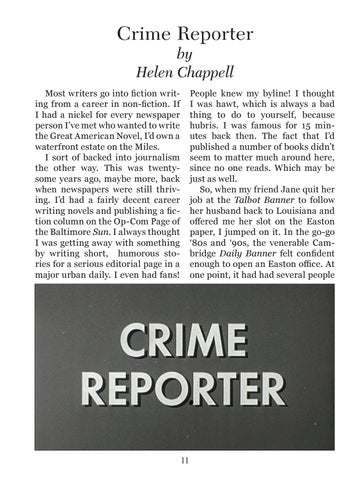 Most writers go into fiction writing from a career in non-fiction. If I had a nickel for every newspaper person I’ve met who wanted to write the Great American Novel, I’d own a waterfront estate on the Miles. I sort of backed into journalism the other way. This was twentysome years ago, maybe more, back when newspapers were still thriving. I’d had a fairly decent career writing novels and publishing a fiction column on the Op-Com Page of the Baltimore Sun. I always thought I was getting away with something by writing short, humorous stories for a serious editorial page in a major urban daily. I even had fans!

People knew my byline! I thought I was hawt, which is always a bad thing to do to yourself, because hubris. I was famous for 15 minutes back then. The fact that I’d published a number of books didn’t seem to matter much around here, since no one reads. Which may be just as well. So, when my friend Jane quit her job at the Talbot Banner to follow her husband back to Louisiana and offered me her slot on the Easton paper, I jumped on it. In the go-go ‘80s and ‘90s, the venerable Cambridge Daily Banner felt confident enough to open an Easton office. At one point, it had had several people