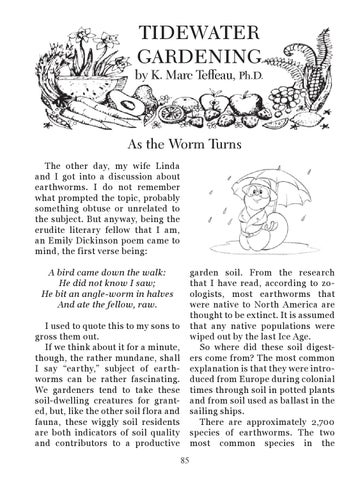 As the Worm Turns The other day, my wife Linda and I got into a discussion about earthworms. I do not remember what prompted the topic, probably something obtuse or unrelated to the subject. But anyway, being the erudite literary fellow that I am, an Emily Dickinson poem came to mind, the first verse being: A bird came down the walk: He did not know I saw; He bit an angle-worm in halves And ate the fellow, raw.

garden soil. From the research that I have read, according to zoologists, most earthworms that were native to North America are thought to be extinct. It is assumed that any native populations were wiped out by the last Ice Age. So where did these soil digesters come from? The most common explanation is that they were introduced from Europe during colonial times through soil in potted plants and from soil used as ballast in the sailing ships. There are approximately 2,700 species of earthworms. The two most common species in the

I used to quote this to my sons to gross them out. If we think about it for a minute, though, the rather mundane, shall I say â&#x20AC;&#x153;earthy,â&#x20AC;? subject of earthworms can be rather fascinating. We gardeners tend to take these soil-dwelling creatures for granted, but, like the other soil flora and fauna, these wiggly soil residents are both indicators of soil quality and contributors to a productive 85