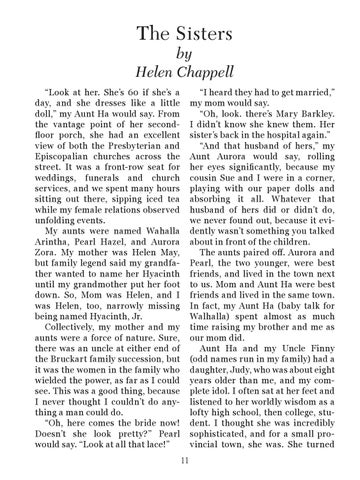 by Helen Chappell “Look at her. She’s 60 if she’s a day, and she dresses like a little doll,” my Aunt Ha would say. From the vantage point of her secondfloor porch, she had an excellent view of both the Presbyterian and Episcopalian churches across the street. It was a front-row seat for weddings, funerals and church services, and we spent many hours sitting out there, sipping iced tea while my female relations observed unfolding events. My aunts were named Wahalla Arintha, Pearl Hazel, and Aurora Zora. My mother was Helen May, but family legend said my grandfather wanted to name her Hyacinth until my grandmother put her foot down. So, Mom was Helen, and I was Helen, too, narrowly missing being named Hyacinth, Jr. Collectively, my mother and my aunts were a force of nature. Sure, there was an uncle at either end of the Bruckart family succession, but it was the women in the family who wielded the power, as far as I could see. This was a good thing, because I never thought I couldn’t do anything a man could do. “Oh, here comes the bride now! Doesn’t she look pretty?” Pearl would say. “Look at all that lace!”

“I heard they had to get married,” my mom would say. “Oh, look. there’s Mary Barkley. I didn’t know she knew them. Her sister’s back in the hospital again.” “And that husband of hers,” my Aunt Aurora would say, rolling her eyes significantly, because my cousin Sue and I were in a corner, playing with our paper dolls and absorbing it all. Whatever that husband of hers did or didn’t do, we never found out, because it evidently wasn’t something you talked about in front of the children. The aunts paired off. Aurora and Pearl, the two younger, were best friends, and lived in the town next to us. Mom and Aunt Ha were best friends and lived in the same town. In fact, my Aunt Ha (baby talk for Walhalla) spent almost as much time raising my brother and me as our mom did. Aunt Ha and my Uncle Finny (odd names run in my family) had a daughter, Judy, who was about eight years older than me, and my complete idol. I often sat at her feet and listened to her worldly wisdom as a lofty high school, then college, student. I thought she was incredibly sophisticated, and for a small provincial town, she was. She turned 11