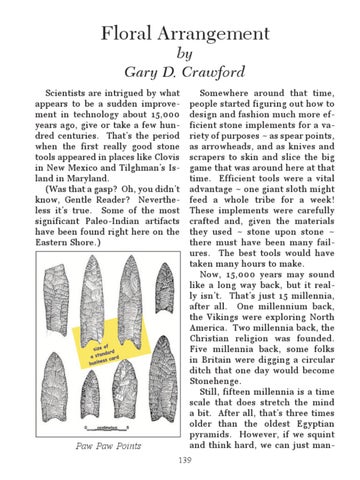 Scientists are intrigued by what appears to be a sudden improvement in technology about 15,000 years ago, give or take a few hundred centuries. That’s the period when the first really good stone tools appeared in places like Clovis in New Mexico and Tilghman’s Island in Maryland. (Was that a gasp? Oh, you didn’t know, Gentle Reader? Nevertheless it’s true. Some of the most significant Paleo-Indian artifacts have been found right here on the Eastern Shore.)

Somewhere around that time, people started figuring out how to design and fashion much more efficient stone implements for a variety of purposes ~ as spear points, as arrowheads, and as knives and scrapers to skin and slice the big game that was around here at that time. Efficient tools were a vital advantage ~ one giant sloth might feed a whole tribe for a week! These implements were carefully crafted and, given the materials they used ~ stone upon stone ~ there must have been many failures. The best tools would have taken many hours to make. Now, 15,000 years may sound like a long way back, but it really isn’t. That’s just 15 millennia, after all. One millennium back, the Vikings were exploring North America. Two millennia back, the Christian religion was founded. Five millennia back, some folks in Britain were digging a circular ditch that one day would become Stonehenge. Still, fifteen millennia is a time scale that does stretch the mind a bit. After all, that’s three times older than the oldest Egyptian pyramids. However, if we squint and think hard, we can just man-