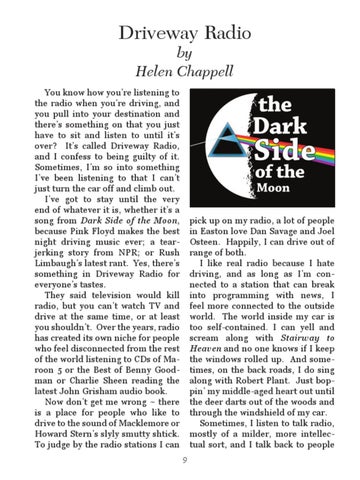 You know how you’re listening to the radio when you’re driving, and you pull into your destination and there’s something on that you just have to sit and listen to until it’s over? It’s called Driveway Radio, and I confess to being guilty of it. Sometimes, I’m so into something I’ve been listening to that I can’t just turn the car off and climb out. I’ve got to stay until the very end of whatever it is, whether it’s a song from Dark Side of the Moon, because Pink Floyd makes the best night driving music ever; a tearjerking story from NPR; or Rush Limbaugh’s latest rant. Yes, there’s something in Driveway Radio for everyone’s tastes. They said television would kill radio, but you can’t watch TV and drive at the same time, or at least you shouldn’t. Over the years, radio has created its own niche for people who feel disconnected from the rest of the world listening to CDs of Maroon 5 or the Best of Benny Goodman or Charlie Sheen reading the latest John Grisham audio book. Now don’t get me wrong ~ there is a place for people who like to drive to the sound of Macklemore or Howard Stern’s slyly smutty shtick. To judge by the radio stations I can

pick up on my radio, a lot of people in Easton love Dan Savage and Joel Osteen. Happily, I can drive out of range of both. I like real radio because I hate driving, and as long as I’m connected to a station that can break into programming with news, I feel more connected to the outside world. The world inside my car is too self-contained. I can yell and scream along with Stairway to Heaven and no one knows if I keep the windows rolled up. And sometimes, on the back roads, I do sing along with Robert Plant. Just boppin’ my middle-aged heart out until the deer darts out of the woods and through the windshield of my car. Sometimes, I listen to talk radio, mostly of a milder, more intellectual sort, and I talk back to people 9