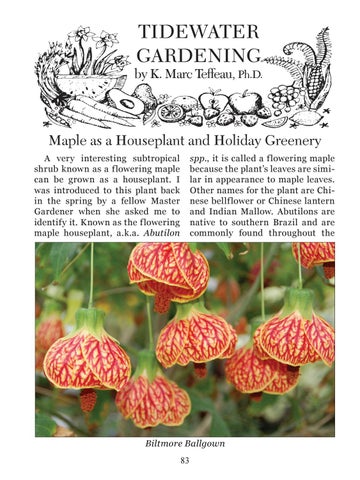 Maple as a Houseplant and Holiday Greenery spp., it is called a f lowering maple because the plantâ&amp;#x20AC;&amp;#x2122;s leaves are similar in appearance to maple leaves. Other names for the plant are Chinese bellf lower or Chinese lantern and Indian Mallow. Abutilons are native to southern Brazil and are commonly found throughout the

A very interesting subtropical shrub known as a f lowering maple can be grown as a houseplant. I was introduced to this plant back in the spring by a fellow Master Gardener when she asked me to identify it. Known as the f lowering maple houseplant, a.k.a. Abutilon