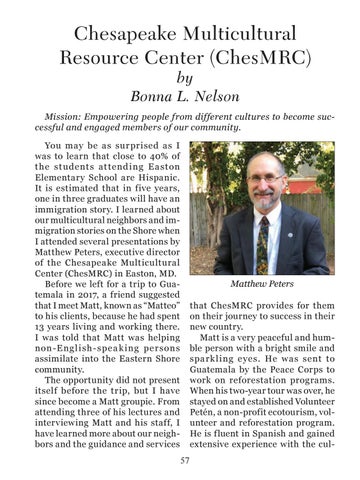 Mission: Empowering people from different cultures to become successful and engaged members of our community. You may be as sur pr ised as I was to learn that close to 40% of t he s t udent s at tend i ng E a s ton Elementary School are Hispanic. It is estimated that in five years, one in three graduates will have an immigration story. I learned about our multicultural neighbors and immigration stories on the Shore when I attended several presentations by Matthew Peters, executive director of the Chesapeake Multicultural Center (ChesMRC) in Easton, MD. Before we left for a trip to Guatemala in 2017, a friend suggested that I meet Matt, known as “Matteo” to his clients, because he had spent 13 years living and working there. I was told that Matt was helping non-E ng l i sh- sp e a k i ng p er s on s assimilate into the Eastern Shore community. The opportunity did not present itself before the trip, but I have since become a Matt groupie. From attending three of his lectures and interviewing Matt and his staff, I have learned more about our neighbors and the guidance and services

Matthew Peters that ChesMRC provides for them on their journey to success in their new country. Matt is a very peaceful and humble person with a bright smile and spa rk ling eye s. He wa s sent to Guatemala by the Peace Corps to work on reforestation programs. When his two-year tour was over, he stayed on and established Volunteer Petén, a non-profit ecotourism, volunteer and reforestation program. He is f luent in Spanish and gained extensive experience with the cul57