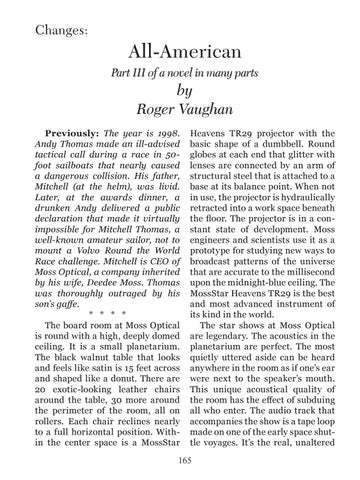 All-American Part III of a novel in many parts

by Roger Vaughan Previously: The year is 1998. Andy Thomas made an ill-advised tactical call during a race in 50foot sailboats that nearly caused a dangerous collision. His father, Mitchell (at the helm), was livid. Later, at the awards dinner, a drunken Andy delivered a public declaration that made it virtually impossible for Mitchell Thomas, a well-known amateur sailor, not to mount a Volvo Round the World Race challenge. Mitchell is CEO of Moss Optical, a company inherited by his wife, Deedee Moss. Thomas was thoroughly outraged by his son’s gaffe. * * * * The board room at Moss Optical is round with a high, deeply domed ceiling. It is a small planetarium. The black walnut table that looks and feels like satin is 15 feet across and shaped like a donut. There are 20 exotic-looking leather chairs around the table, 30 more around the perimeter of the room, all on rollers. Each chair reclines nearly to a full horizontal position. Within the center space is a MossStar

Heavens TR29 projector with the basic shape of a dumbbell. Round globes at each end that glitter with lenses are connected by an arm of structural steel that is attached to a base at its balance point. When not in use, the projector is hydraulically retracted into a work space beneath the floor. The projector is in a constant state of development. Moss engineers and scientists use it as a prototype for studying new ways to broadcast patterns of the universe that are accurate to the millisecond upon the midnight-blue ceiling. The MossStar Heavens TR29 is the best and most advanced instrument of its kind in the world. The star shows at Moss Optical are legendary. The acoustics in the planetarium are perfect. The most quietly uttered aside can be heard anywhere in the room as if one’s ear were next to the speaker’s mouth. This unique acoustical quality of the room has the effect of subduing all who enter. The audio track that accompanies the show is a tape loop made on one of the early space shuttle voyages. It’s the real, unaltered