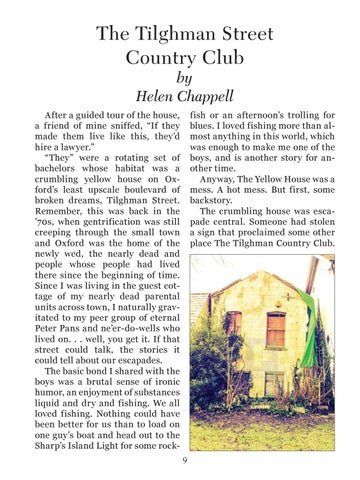 fish or an afternoon’s trolling for blues. I loved fishing more than almost anything in this world, which was enough to make me one of the boys, and is another story for another time. Anyway, The Yellow House was a mess. A hot mess. But first, some backstory. The crumbling house was escapade central. Someone had stolen a sign that proclaimed some other place The Tilghman Country Club.

After a guided tour of the house, a friend of mine sniffed, “If they made them live like this, they’d hire a lawyer.” “They” were a rotating set of bachelors whose habitat was a crumbling yellow house on Oxford’s least upscale boulevard of broken dreams, Tilghman Street. Remember, this was back in the ’70s, when gentrification was still creeping through the small town and Oxford was the home of the newly wed, the nearly dead and people whose people had lived there since the beginning of time. Since I was living in the guest cottage of my nearly dead parental units across town, I naturally gravitated to my peer group of eternal Peter Pans and ne’er-do-wells who lived on. . . well, you get it. If that street could talk, the stories it could tell about our escapades. The basic bond I shared with the boys was a brutal sense of ironic humor, an enjoyment of substances liquid and dry and fishing. We all loved fishing. Nothing could have been better for us than to load on one guy’s boat and head out to the Sharp’s Island Light for some rock9