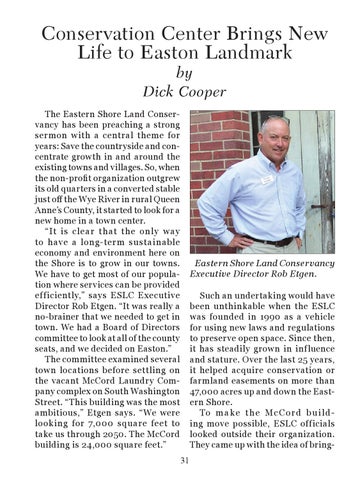 The Eastern Shore Land Conservancy has been preaching a strong sermon with a central theme for years: Save the countryside and concentrate growth in and around the existing towns and villages. So, when the non-profit organization outgrew its old quarters in a converted stable just off the Wye River in rural Queen Anne’s County, it started to look for a new home in a town center. “It is clear that the only way to have a long-term sustainable economy and environment here on the Shore is to grow in our towns. We have to get most of our population where services can be provided efficiently,” says ESLC Executive Director Rob Etgen. “It was really a no-brainer that we needed to get in town. We had a Board of Directors committee to look at all of the county seats, and we decided on Easton.” The committee examined several town locations before settling on the vacant McCord Laundry Company complex on South Washington Street. “This building was the most ambitious,” Etgen says. “We were looking for 7,000 square feet to take us through 2050. The McCord building is 24,000 square feet.”

Eastern Shore Land Conservancy Executive Director Rob Etgen. Such an undertaking would have been unthinkable when the ESLC was founded in 1990 as a vehicle for using new laws and regulations to preserve open space. Since then, it has steadily grown in inf luence and stature. Over the last 25 years, it helped acquire conservation or farmland easements on more than 47,000 acres up and down the Eastern Shore. To m a k e t he Mc C or d bu i ld ing move possible, ESLC officials looked outside their organization. They came up with the idea of bring31