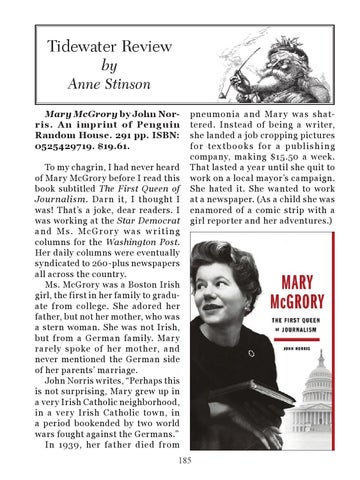 Mary McGrory by John Norr i s. A n i mpr i nt of Peng u i n Random House. 291 pp. ISBN: 0525429719. $19.61. To my chagrin, I had never heard of Mary McGrory before I read this book subtitled The First Queen of Journalism. Darn it, I thought I was! That’s a joke, dear readers. I was working at the Star Democrat a nd M s. Mc Gr or y w a s w r it i ng columns for the Washington Post. Her daily columns were eventually syndicated to 260-plus newspapers all across the country. Ms. McGrory was a Boston Irish girl, the first in her family to graduate from college. She adored her father, but not her mother, who was a stern woman. She was not Irish, but from a German family. Mary rarely spoke of her mother, and never mentioned the German side of her parents’ marriage. John Norris writes, “Perhaps this is not surprising, Mary grew up in a very Irish Catholic neighborhood, in a very Irish Catholic town, in a period bookended by two world wars fought against the Germans.” In 1939, her father died from

pneumonia and Mar y was shattered. Instead of being a writer, she landed a job cropping pictures for te x tb o ok s for a publ i sh i ng company, making $15.50 a week. That lasted a year until she quit to work on a local mayor’s campaign. She hated it. She wanted to work at a newspaper. (As a child she was enamored of a comic strip with a girl reporter and her adventures.)