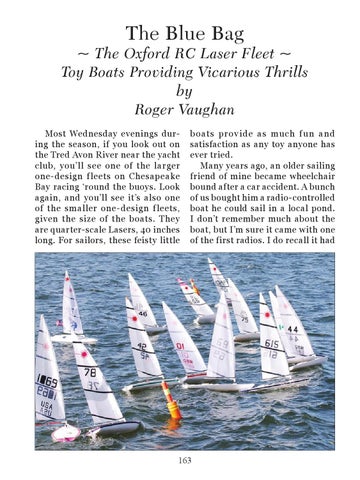 ~ The Oxford RC Laser Fleet ~ Toy Boats Providing Vicarious Thrills by Roger Vaughan Most Wednesday evenings during the season, if you look out on the Tred Avon River near the yacht club, you’ll see one of the larger one-design f leets on Chesapeake Bay racing ‘round the buoys. Look again, and you’ll see it’s also one of the smaller one-design f leets, given the size of the boats. They are quarter-scale Lasers, 40 inches long. For sailors, these feisty little

boats prov ide as much f un and satisfaction as any toy anyone has ever tried. Many years ago, an older sailing friend of mine became wheelchair bound after a car accident. A bunch of us bought him a radio-controlled boat he could sail in a local pond. I don’t remember much about the boat, but I’m sure it came with one of the first radios. I do recall it had