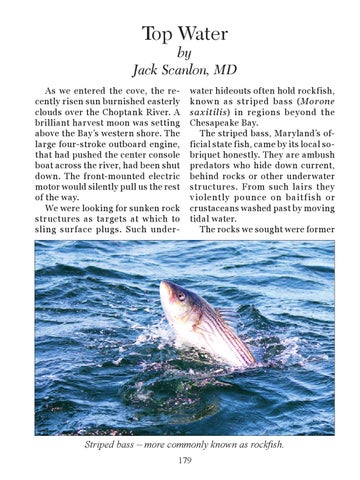 by Jack Scanlon, MD As we entered the cove, the recently risen sun burnished easterly clouds over the Choptank River. A brilliant harvest moon was setting above the Bayâ&#x20AC;&#x2122;s western shore. The large four-stroke outboard engine, that had pushed the center console boat across the river, had been shut down. The front-mounted electric motor would silently pull us the rest of the way. We were looking for sunken rock structures as targets at which to sling surface plugs. Such under-

water hideouts often hold rockfish, know n as striped bass (Morone sa x it ilis) in regions beyond the Chesapeake Bay. The striped bass, Marylandâ&#x20AC;&#x2122;s official state fish, came by its local sobriquet honestly. They are ambush predators who hide down current, behind rocks or other underwater structures. From such lairs they v iolent ly pounce on bait f ish or crustaceans washed past by moving tidal water. The rocks we sought were former