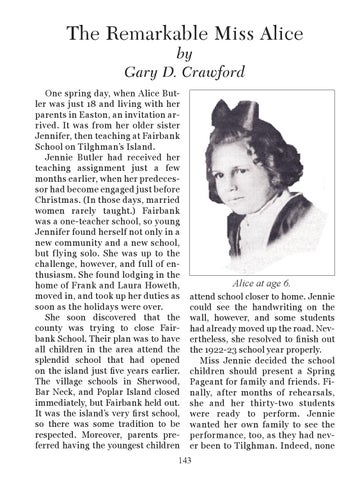 One spring day, when Alice Butler was just 18 and living with her parents in Easton, an invitation arrived. It was from her older sister Jennifer, then teaching at Fairbank School on Tilghmanâ&#x20AC;&#x2122;s Island. Jennie Butler had received her teaching assignment just a few months earlier, when her predecessor had become engaged just before Christmas. (In those days, married women rarely taught.) Fairbank was a one-teacher school, so young Jennifer found herself not only in a new community and a new school, but flying solo. She was up to the challenge, however, and full of enthusiasm. She found lodging in the home of Frank and Laura Howeth, moved in, and took up her duties as soon as the holidays were over. She soon discovered that the county was trying to close Fairbank School. Their plan was to have all children in the area attend the splendid school that had opened on the island just five years earlier. The village schools in Sherwood, Bar Neck, and Poplar Island closed immediately, but Fairbank held out. It was the islandâ&#x20AC;&#x2122;s very first school, so there was some tradition to be respected. Moreover, parents preferred having the youngest children

Alice at age 6. attend school closer to home. Jennie could see the handwriting on the wall, however, and some students had already moved up the road. Nevertheless, she resolved to finish out the 1922-23 school year properly. Miss Jennie decided the school children should present a Spring Pageant for family and friends. Finally, after months of rehearsals, she and her thirty-two students were ready to perform. Jennie wanted her own family to see the performance, too, as they had never been to Tilghman. Indeed, none