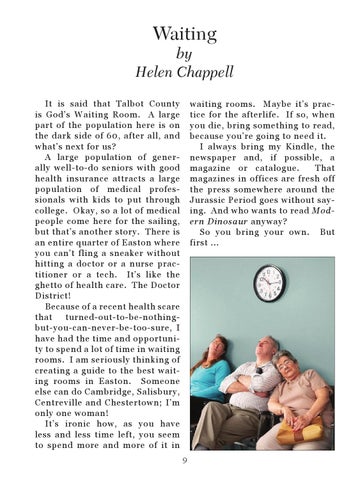 by Helen Chappell It is said that Talbot County is God’s Waiting Room. A large part of the population here is on the dark side of 60, after all, and what’s next for us? A large population of generally well-to-do seniors with good health insurance attracts a large population of medical professionals with kids to put through college. Okay, so a lot of medical people come here for the sailing, but that’s another story. There is an entire quarter of Easton where you can’t fling a sneaker without hitting a doctor or a nurse practitioner or a tech. It’s like the ghetto of health care. The Doctor District! Because of a recent health scare that turned-out-to-be-nothingbut-you-can-never-be-too-sure, I have had the time and opportunity to spend a lot of time in waiting rooms. I am seriously thinking of creating a guide to the best waiting rooms in Easton. Someone else can do Cambridge, Salisbury, Centreville and Chestertown; I’m only one woman! It’s ironic how, as you have less and less time left, you seem to spend more and more of it in

waiting rooms. Maybe it’s practice for the afterlife. If so, when you die, bring something to read, because you’re going to need it. I always bring my Kindle, the newspaper and, if possible, a magazine or catalogue. That magazines in offices are fresh off the press somewhere around the Jurassic Period goes without saying. And who wants to read Modern Dinosaur anyway? So you bring your own. But first ...