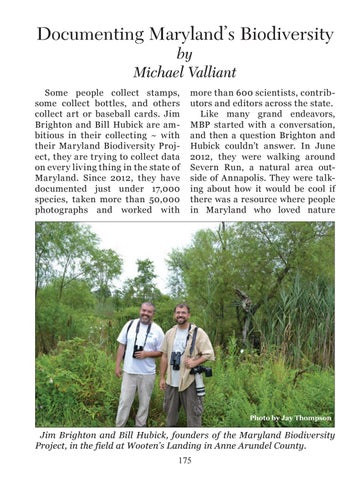 Some people collect stamps, some collect bottles, and others collect art or baseball cards. Jim Brighton and Bill Hubick are ambitious in their collecting ~ with their Maryland Biodiversity Project, they are trying to collect data on every living thing in the state of Maryland. Since 2012, they have documented just under 17,000 species, taken more than 50,000 photographs and worked with

more than 600 scientists, contributors and editors across the state. Like many grand endeavors, MBP started with a conversation, and then a question Brighton and Hubick couldn’t answer. In June 2012, they were walking around Severn Run, a natural area outside of Annapolis. They were talking about how it would be cool if there was a resource where people in Maryland who loved nature

Jim Brighton and Bill Hubick, founders of the Maryland Biodiversity Project, in the field at Wooten’s Landing in Anne Arundel County. 175