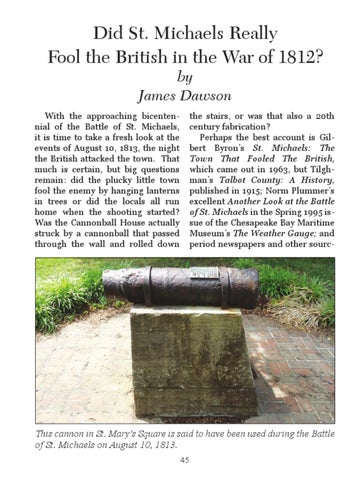 Did St. Michaels Really Fool the British in the War of 1812? by James Dawson

With the approaching bicentennial of the Battle of St. Michaels, it is time to take a fresh look at the events of August 10, 1813, the night the British attacked the town. That much is certain, but big questions remain: did the plucky little town fool the enemy by hanging lanterns in trees or did the locals all run home when the shooting started? Was the Cannonball House actually struck by a cannonball that passed through the wall and rolled down

the stairs, or was that also a 20th century fabrication? Perhaps the best account is Gilbert Byron’s St. Michaels: The Town That Fooled The British, which came out in 1963, but Tilghman’s Talbot County: A History, published in 1915; Norm Plummer’s excellent Another Look at the Battle of St. Michaels in the Spring 1995 issue of the Chesapeake Bay Maritime Museum’s The Weather Gauge; and period newspapers and other sourc-